Last week I posted one of my most recent illustrations titled, "The Deep Dark Wolf". Since it has been awhile since I've updated this blog, and even longer since I've done a process-post, I figured this would be a great time to do both!

The topic for the illustration was given through the prompt, "Worst Fears." I knew I wanted it to be portfolio quality, but nothing immediately came to mind what to draw. So I started thinking about something all of my kids were afraid of and I came to conclusion of The Deep Dark Wolf (as explained in the last post he is an antagonist that occasionally shows up in my kids bed-time stories to terrorize them.)

I had a wealth of content and visuals to draw from inside my head, but knew everything hinged on getting the Deep Dark Wolf right. So I sculpted a mock-up of what I thought the wolf would look like: 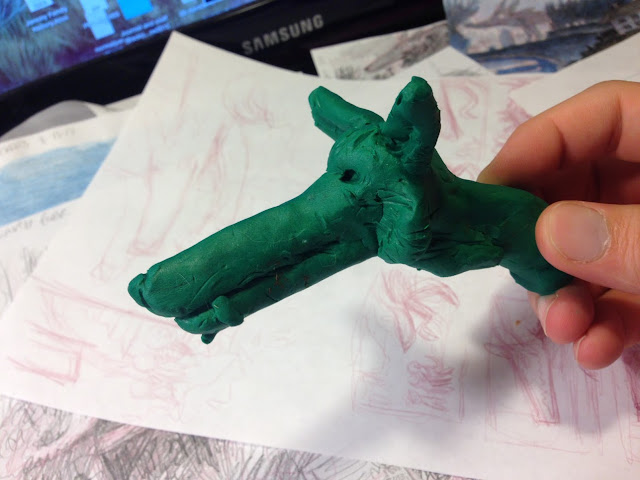 From there I started to experiment and visually see how I might portray the creature on paper, in its environment and how the main characters might look (In regards to the wolf's design, initially the important thing was its ambiguously large size and long snout): 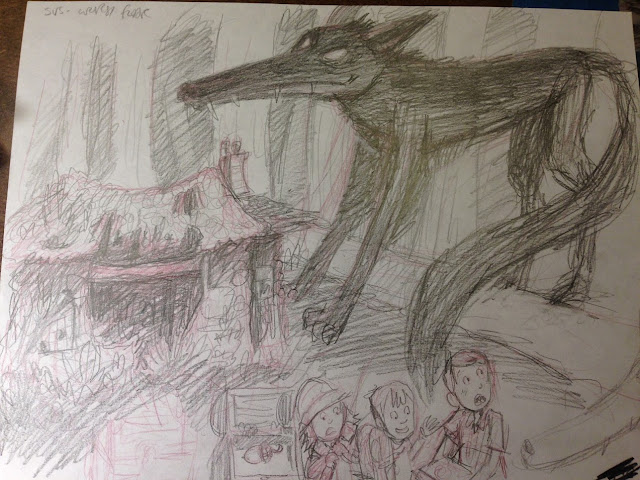 Once I got the feel for the wolf I began to experiment more different designs. here is one that I really liked, but  at least for this illustration was too detailed: 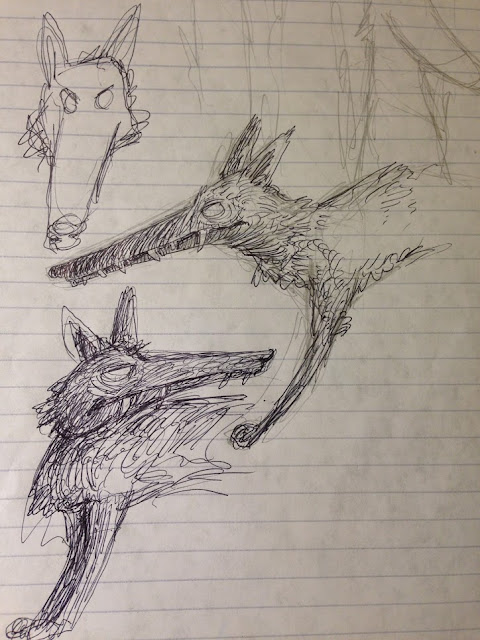 And then it was time to work on the composition. Originally I was going to focus on the origin Deep Dark Wolf story where my kids had a show-down with it inside his old house, which was deep in the woods and forgotten, and so I spent a lot of time experimenting with that: 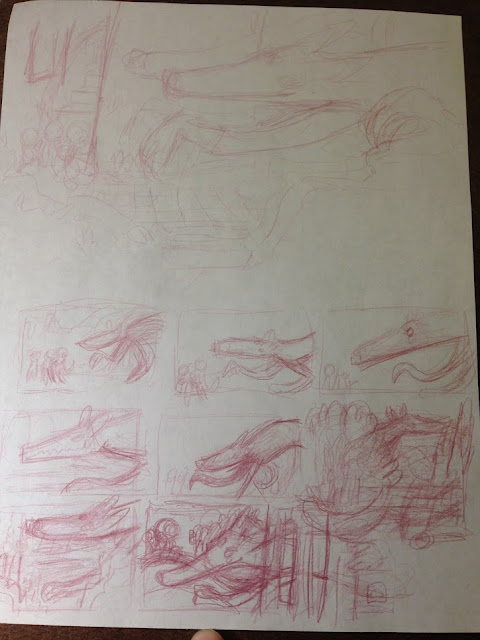 Something never felt right, and I kept feeling claustrophobic, so I dialed back. Way back and found what I was looking for: 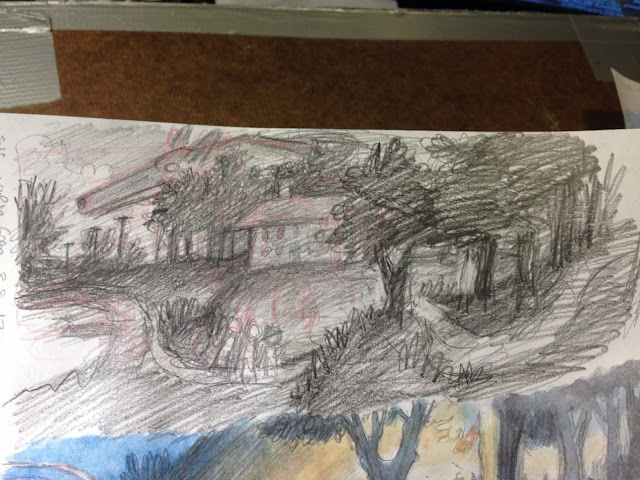 Since the illustration was so expansive, I decided to focus on the Focal Points and flesh them out with several quick watercolor/colored pencil sketches (using the draft above as my MAP or guide): 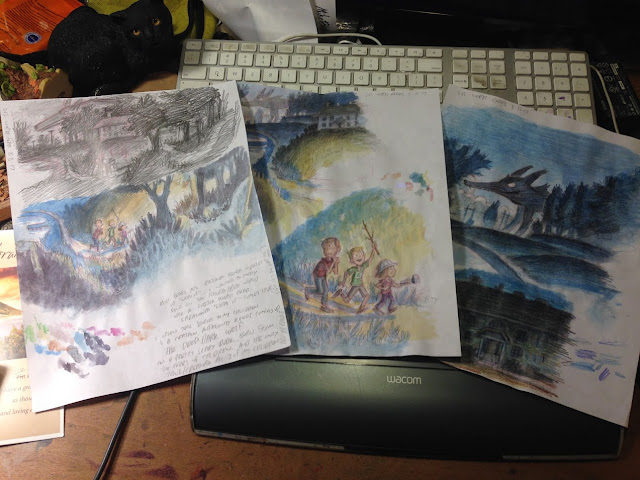 Then I scanned all the watercolor sketches in, tore them apart, assembled back together, and then painted over them digitally: 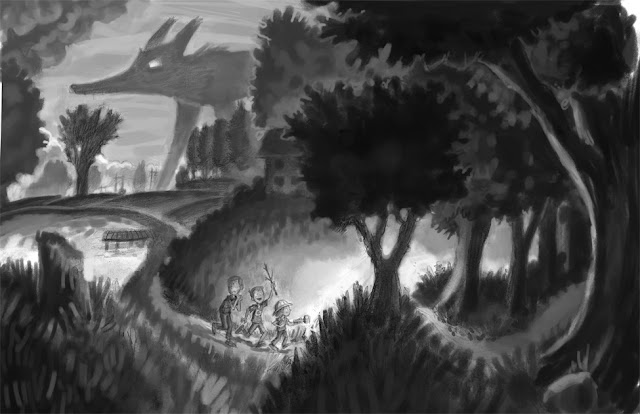 Since my characters were so small and I wanted the details to be right, I really blew up this sketch and printed it off 17x27. It was so large...well you can tell it took over my whole desk: 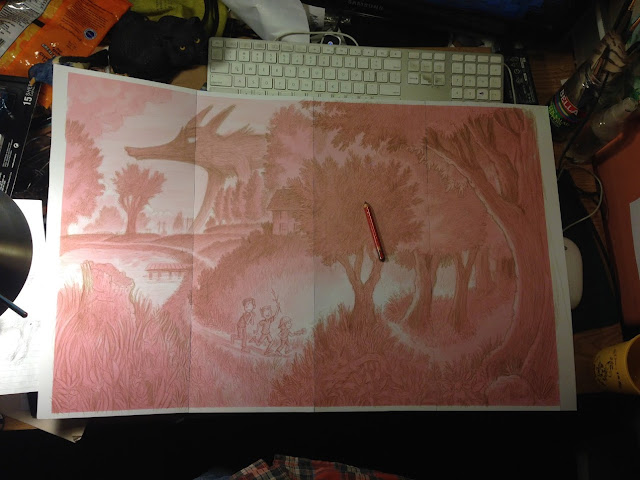 You might notice the picture has strange creases. Since my printer only goes 13x19, I decided to break the illustration in 4 equal parts, where I would tape it together and everything would balance out. I was using card-stock, so there was no lip or ridge between sections, and the tape on the back-side hardly ever showed through on my sketch: 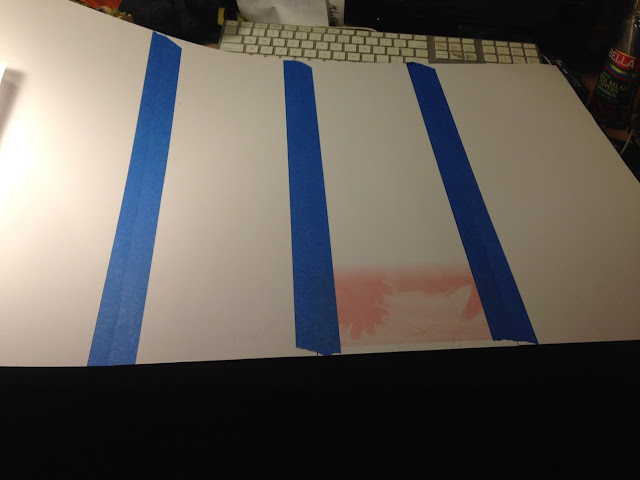 Then when I was done with the physical sketching, I scanned it in (which took me 14 separate scans that photoshop thankfully stitched together for me), removed the 3 lines and cleaned up any other details. 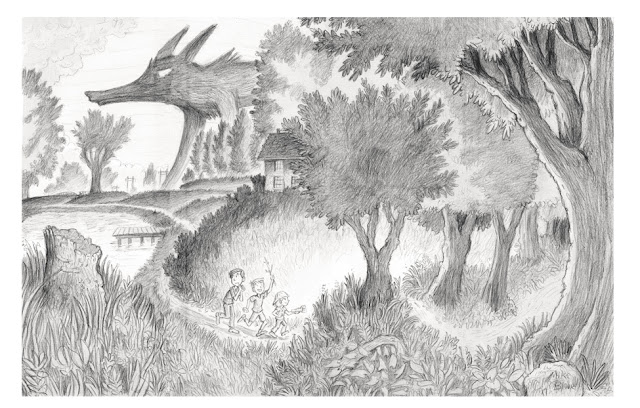 Well this post is already long enough. Obviously I colored this sketch and was really pleased with the results. Maybe I will do a post about coloring, but I'm pretty busy and it took a lot of focus and time to get this together (as haphazard as it was).
Posted by Mike Blake Studio at 8:30 AM

Mike Blake Studio
Freelance Illustrator from the midwest. When not busy with client work, he loves exploring his neighborhood and the beautiful surrounding forests and lakes with his family. http://www.mikeblakestudio.com